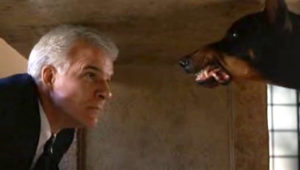 The right thing needs to be said at the right time, and the receiver must be ready for the message.

In the movie, “Father of the Bride,” the bride’s father (played by Steve Martin) is visiting the house of the wealthy soon-to-be in-laws.

He is lured into snooping through the man’s home office when their Doberman pinscher catches him in the act and stares him down.

Steve Martin remembers the owner saying a word that calmed the dog and sent him away.

In the panic and stress of the moment, Martin couldn’t remember the word… he said whatever words came to his mind like “relent” before he came up with the word, “release.”

But it was too late as they were already in attack mode.

Governor Kemp has given the “release” to get back to work and some semblance of normal life.

However, many will not hear the word “release” but some version of “relent” as they remain hunkered down.

This will be especially true for your older donors.

Reach out to these older donors to find out how they are doing and if they need anything. Perhaps they will just need some encouragement, and appreciate that you cared enough to call.

Do NOT hunker down on your reaching out to donors. This is the time to be visible and over-communicate.

“Be joyful always; pray continuously; in everything give thanks;
for this is God’s will for you in Christ Jesus.”